By Patricia D'SouzaSeptember 26, 2019 No Comments

September 26, 2019, Ottawa, Ontario – The Inuit Tapiriit Kanatami Board of Directors agreed to move forward with a unified orthography for Inuktut during its meeting in Rankin Inlet this month. The new orthography will be implemented as an auxiliary system alongside the existing orthographies used regionally.

There are currently nine different Inuktut writing systems across Inuit Nunangat introduced since the mid-1700s. Inuktut Qaliujaaqpait has been developed by Inuit, for Inuit.

Inuktut Qaliujaaqpait is a common set of symbols for Inuktut sounds that allows written text to reflect spoken words in any dialect of Inuktut. It is based on the Roman alphabet, which is already used as a primary or a secondary script in all regions of Inuit Nunangat.

Inuktut Qaliujaaqpait is both easy to learn and easy to use, allowing those who have already learned another Inuit writing system to easily adapt while simultaneously providing a solid foundation for first-time Inuktut language learners.

The ITK Board of Directors resolution reads, in part: “Whereas the utility of the proposed orthography has been tested and it has been determined that it is easier for Inuit to write and read material from other regions with ease using the proposed Inuktut Qaliujaaqpait orthography, including ease of typing on a keyboard by eliminating the need for diacritics; therefore be it resolved that the proposed Inuktut Qaliujaaqpait orthography is approved.” It was moved by Charlie Watt, President of Makivik Corporation, Seconded by Johannes Lampe, President of Nunatsiavut, and carried unanimously.

Implementation plans specific to the needs and wishes of each region of Inuit Nunangat will be developed through an expert subcommittee made up of representatives from Inuvialuit Regional Corporation, Nunavut Tunngavik Incorporated, Makivik Corporation and the Nunatsiavut Government and reporting to the National Inuit Committee on Education.

It has long been understood that an Inuit-centered education system must be bilingual and restore the central role of the Inuit language. The public education system has not significantly incorporated Inuktut into its structure and Inuktut language resources are still limited. Adequate resources are key components for developing curriculum standards and supporting systems in providing Inuit-centered learning environments and positive outcomes for students and bilingual teachers.

Since the 1970s the discussion around promoting and supporting the continued use of Inuktut in schools across Canada’s four Inuit regions has included a deeply rooted debate about introducing a unified Inuit writing system to promote communication across dialects and the development of common learning materials.

ITK thanks Inuktut language experts across Inuit Nunangat who have contributed to the development of Inuktut Qaliujaaqpait, and the Counselling Foundation of Canada, which has contributed $1 million toward supporting the exploration and development of a new orthography for Inuktut since 2012.

“Approval of Inuktut Qaliujaaqpait is a crucial step toward strengthening Inuktut across Inuit Nunangat. It also fulfills a key recommendation in the 2011 National Strategy on Inuit Education, which highlighted the need for a unified orthography in educational resources and communication materials. It is a critical step in Inuit self-determination and taking ownership of our written language. Our current writing systems were introduced through the process of colonization. The unified Inuktut writing system will be a writing system created by Inuit for Inuit in Canada.”
– Natan Obed, President, Inuit Tapiriit Kanatami

“IRC is examining all alternative methods to preserve our Inuvialuktun language; if this means to unify with other Inuit regions to have a common Inuktut orthography than we must realize this now due to the urgency of low Inuvialuktun proficiency levels. We are fortunate to have 20 per cent of our population fluent in Inuvialuktun, but the next three generations are not proficient in the language. A common orthography means the sharing of resources and curriculum across Inuit Nunangat, thus providing a more effective method of learning Inuvialuktun, sadly as a second language.”
– Duane Smith, Chair and CEO, Inuvialuit​ Regional Corporation

This work in standardization of a unified Qaliujaaqpait Inuktut writing system demonstrates Inuit adaptability and resourcefulness as we embrace contemporary life in a globally connected world. Within Nunavut, we will continue to use Qaniujaaqpait (syllabics), and will work with regional and national partners in adoption and use of our newly adopted Inuktut Orthography.
– Aluki Kotierk, President, Nunavut Tunngavik Incorporated

“Approving a writing system that has been developed by Inuit follows a long legacy of careful thought and consideration. Now is the time to move forward with a unified writing system to protect and preserve our language for our youth.”
– Charlie Watt Sr., President, Makivik Corporation

“Our language is in danger of disappearing. The Nunatsiavut Government welcomes the development of a unified writing system, as we strongly believe it will help to enhance, promote and revitalize Inuttitut. Having a common orthography will provide all Inuit with a more effective way of communicating with each other throughout Inuit Nunangat.”
– Johannes Lampe, President of Nunatsiavut

“Revitalization of Inuktut continues to be a priority of the National Inuit Youth Council. We acknowledge that our language is at risk of being lost at no fault of our own and we welcome this resolution from the ITK Board. We look forward to continuing our work with the committee in advancing the unified writing system that will revitalize and strengthen our Inuktut language for future generations to come.”
– Crystal Martin-Lapenskie, President, the National Inuit Youth Council

Why was Inuktut Qaliujaaqpait developed?
There is currently no single writing system used throughout Inuit Nunangat. Different regions use different writing systems, and often different variants of a writing system exist in the same region. This creates a barrier to communicating and sharing materials between regions because while Inuit can generally understand each other’s spoken dialects, it is more difficult to read other dialect-specific writing systems. People trying to develop written materials also face uncertainty over which writing system or spelling conventions they should use.

Why was roman orthography chosen for the Inuktut Qaliujaaqpait?
Some main considerations for basing the unified writing system on the roman alphabet were:

It is important to remember that the roman alphabet doesn’t belong only to the English language. It’s a very old set of symbols that has been used across the globe to promote national orthographies in language and publications.

What are the benefits of using Inuktut Qaliujaaqpait?
The benefits of the Inuktut Qaliujaaqpait include having a common set of symbols representative of all Inuktut sounds. This way speakers of any dialect from any region can write using the Inuktut Qaliujaaqpait while still following the pronunciation that they use in their own dialects. This makes it easier to read each other’s dialects and means Inuktut speakers are able to produce and share materials between regions. Over time, there will be greater consistency in Inuktut language education. Ultimately, it facilitates the use of Inuktut over time as a working language for business and higher education.

Do I need a special computer font?
Because Inuktut Qaliujaaqpait uses roman orthography, there are no special characters or font required.

How will Inuktut Qaliujaaqpait be taught?
Inuktut Qaliujaaqpait is both easy to learn and easy to use, allowing those who have already learned another Inuit writing system to adapt while simultaneously providing a solid foundation for first-time Inuktut language learners.  ITK and Inuit regions will convene an implementation committee to develop next steps. Implementation plans will be specific to each region’s needs and will look at how Inuktut Qaliujaaqpait will be taught and learned. In the short term, ITK and regional experts will present to interested groups upon request.

Does this mean there are going to be standard rules for Inuktut spelling and grammar?
As it stands, Inuktut Qaliujaaqpait does not include any standard spelling or grammar rules. It is simply a standard set of characters standing for the sounds of Inuktut. 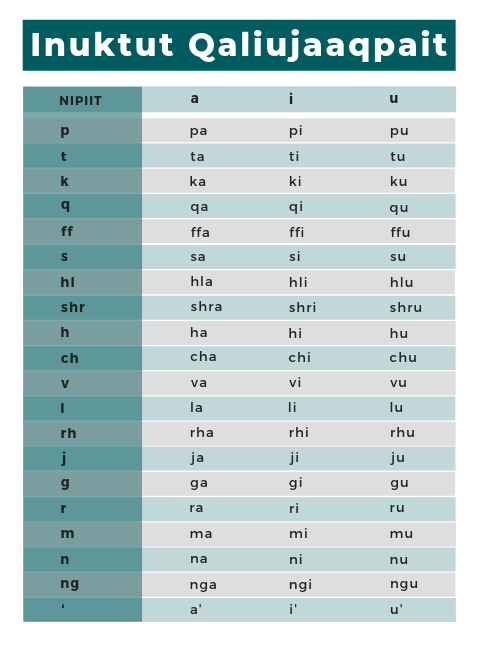 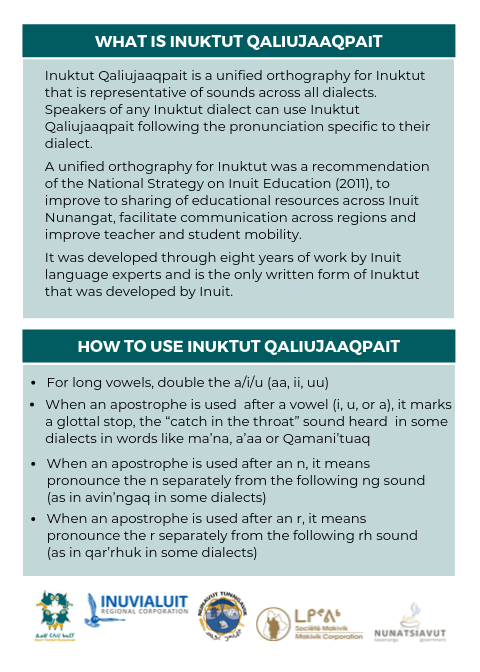 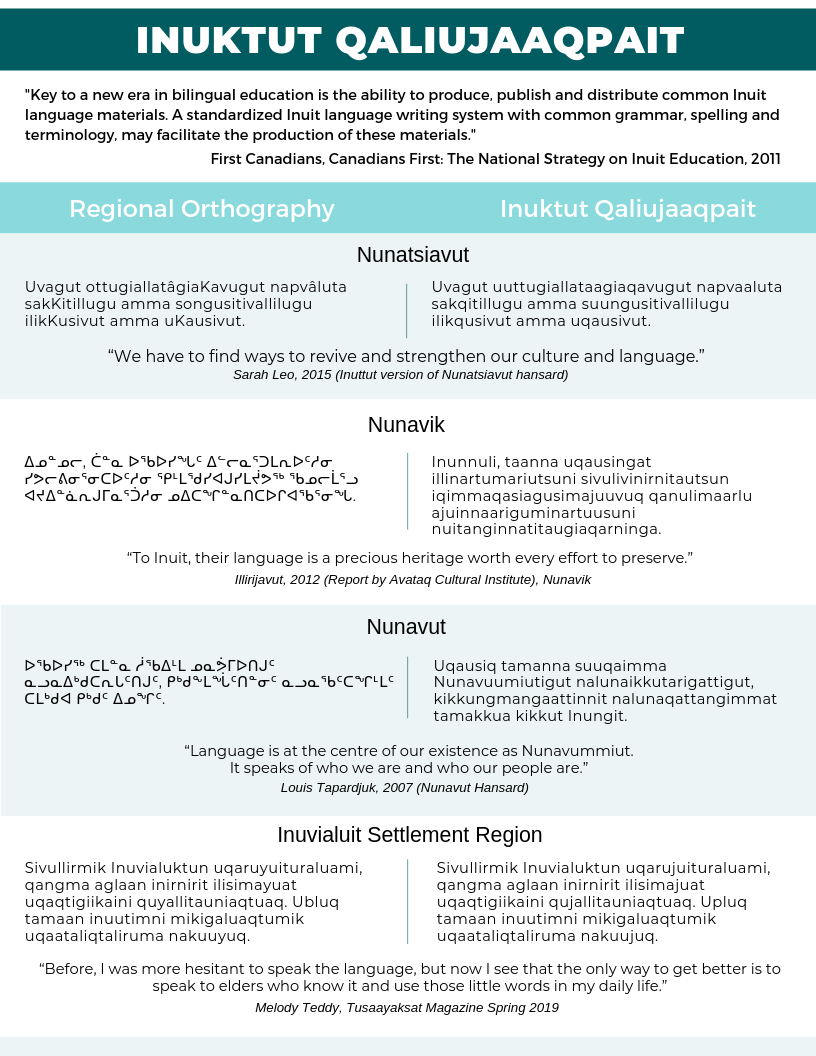