June 3, 2020 – Ottawa, Ontario – On the anniversary of the release of the final report and 231 Calls for Justice of the National Inquiry into Missing and Murdered Indigenous Women and Girls (MMIWG), Inuit Tapiriit Kanatami (ITK) remains committed to the full implementation of the 231 Calls for Justice, including the co-development of a National Action Plan with Inuit leadership, National Indigenous Organizations, the Prime Minister, and the Government of Canada.

Several of the 231 Calls for Justice relate to human and Indigenous rights and governmental obligations, including calls for government to immediately implement rights instruments such as the United National Declaration on the Rights of Indigenous Peoples. ITK continues to advocate for the implementation of Call for Justice 1.7 regarding the creation of a National Indigenous and Human Rights Ombudsperson and a National Indigenous Human Rights Tribunal, and calls for these measures to be included in forthcoming legislation to implement the UN Declaration in Canada.

ITK has committed to implementing all of the Calls for Justice, including 46 Inuit-specific calls, through a June 2019 resolution of the ITK Board of Directors. To this end, the implementation of the Calls for Justice are now a priority area within the Inuit-Crown Partnership Committee, where Inuit leadership, the Prime Minister and federal ministers pursue mutual goals to implement shared ambitions.

At an organizational level, ITK developed its 2020-2023 Strategy and Action Plan with an MMIWG lens. It was released in May with a 98% overlap in its deliverables and the 46 Inuit-specific Calls for Justice. It sets as objectives a number of policy areas with direct links to the Calls for Justice, including taking action to reduce poverty among Inuit, which includes quantifying the social costs associated with poverty in Inuit Nunangat and advancing poverty reduction interventions; advancing Inuit-specific health and social development policies, programs and initiatives, which includes specific reference to supporting the implementation of the Calls for Justice; and supporting Inuktut revitalization and promotion.

On this poignant anniversary, ITK once again thanks everyone who was involved in making the National Inquiry a powerful agent for change, including family members, survivors of violence, elders, and experts who openly spoke their truths over two years of cross-country public hearings and evidence gathering in the interest of giving power to future generations. The 231 Calls for Justice are directed at governments, institutions, social services agencies, industries and all Canadians.”

“On this day and every day I affirm my commitment to fulfilling my obligations to uphold and advance the work of implementing the Calls for Justice. ITK echoes the calls from families and from the National Inquiry for substantive equality for First Nations, Inuit, and Métis women and girls, and solutions based on self-determination and self-governance reflective of the distinct relationship between Inuit and the Crown. This is an unprecedented national opportunity for transformative change, and I urge the Government of Canada to respond to the Calls for Justice with humility and respect through all steps necessary, in partnership with Inuit, to bring about the change we all need,” said Natan Obed, President of Inuit Tapiriit Kanatami.

The anniversary of the final report of the National Inquiry on June 3 comes during a period of intense remembrance and reflection, with the Final Report of the Truth and Reconciliation Commission of Canada delivered five years ago on June 2, the federal government’s apology to survivors of residential schools delivered 12 years ago on June 11, and amid widespread protest across cities in Canada and the United States calling for an end to racial injustice. ITK stands in solidarity with all those standing up against systemic race-based violence and racism in Canada, the United States and around the world. 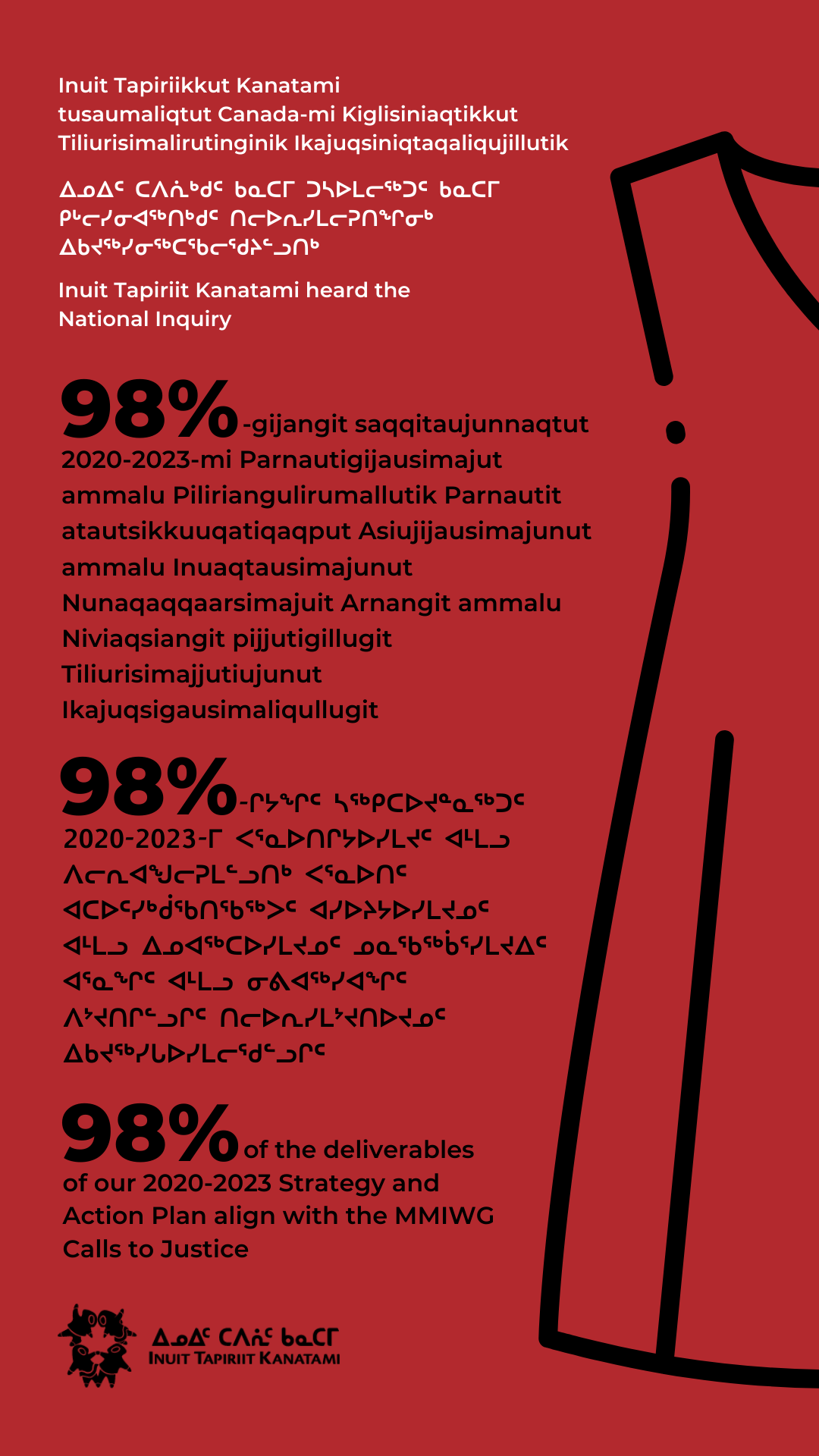