By Patricia D'SouzaOctober 12, 2021 No Comments

During Inuit Tapiriit Kanatami’s annual general meeting in Iqaluit in September, the ITK Board of Directors presented the annual ITK Awards to outstanding individuals throughout Inuit Nunangat. The awards are traditionally presented by the region that is hosting the AGM, which was originally scheduled to be in Nunavik. In recognition of the warm welcome we received in Iqaluit, the Board recognized one Nunavummiuk for exceptional service to Inuit over the past year.

The awards include the Inuit Cultural Repatriation Award, presented this year for the fourth time since its conception in 2017. This award was created by ITK to recognize work to overcome the legacy of misappropriation of our culture and cultural artifacts. It was developed in response to growing concerns about cultural appropriation across Canada and around the world, and to recognize the work that is being done in our regions to reclaim what is ours. Through this award we hope to promote a greater understanding of how to overcome cultural appropriation, in partnership with Inuit.

ITK thanks all recipients for their contributions to their regions and to all Inuit.

Presented by Aluki Kotierk, Nunavut Tunngavik Incorporated
ITK Advancement of Health Award
Ooleepika Ikkidluak
Oeleepika was nominated by Nunavut Tunngavik Incorporated for her steadfast work during the COVID-19 pandemic. She has been a regular feature of public health updates by the the Nunavut Premier and Chief Public Health Officer, delivering consistent and reliable messaging in Inuktitut during a very difficult time for everyone. Her work was critical to early acceptance of public health measures among Inuit, and she has played a vital role in ensuring the health and safety of Nunavummiut. Ooleepika has been an interpreter for 30 years and has made the smooth adjustment to becoming a public figure. The ITK Board of Directors thanks her for her skill and expertise in Inuktitut, and her commitment to the wellbeing of her community.

Presented by Pita Aatami, Makivik Corporation
ITK Advancement of Inuit Culture Award
Johnny May Jr.
Junior (Johnny) May has had a dog team since he was a young man. Now in his late 40s, Junior jokes that he will try and have dogs until he’s 80. He had dog teams before the first Ivakkak Race, and has competed in most of the races, missing only a few over the years. He was one of the original nine racers when it began 21 years ago. He will continue to have dogs, even if he does not compete, because he loves it. Junior is an excellent ambassador for the continued cultural relevance of this Inuit tradition. Makivik Board Member Elijah Ningiuruvik nominted Junior for his dedication to the way of life that is required when raising and running a dog team.

Presented by Pita Aatami, Makivik Corporation
Mary Joanne Kauki
ITK Advancement of Inuit Language Award
Mary Joanne has been an educator for many, many years. She is a passionate teacher and has dedicated her life to teaching young people our language. Hey dedication to her students has gone well beyond that of a typical 9 to 5 worker. She has taken the time to design and create lesson plans on her own time to give her students the education they need. Mary Joanne is also an advocate for equality within the workplace and has taken it upon herself to teach organizations about colonization and has given very insightful presentations on the subject of decolonization. Makivik Board Member Vinnie Baron nominated Mary Joanne to acknowledge her tireless work as an educator and for the time she has dedicated to going the extra mile for her students.

Presented by Pita Aatami, Makivik Corporation
Elder Joseph Nassak
ITK Advancement of Inuit Knowledge Award
Joseph Nassak has been involved with the Aulasivik youth summer camp over years as an educator. Makivik Board Member Etua Kaukai and Kangirsuk Mayor Noah Eetook nominated Joseph in recognition of his work teaching Kangirsuk youth cultural and traditional values, how to survive on land and sea, which type of weather should or should not be challenged and what sources of food to survive on. He also goes on the radio to teach Inuit values and is involved with Inuit traditional Christmas Games in the community and can also be found playing the accordion at Christmas.

Presented by Pita Aatami, Makivik Corporation
Paulusie Novalinga
ITK Advancement of Inuit Knowledge Award
Paulusie was nominated by Makivik Board Member Kulu Tukalak for his tireless promotopm pf the traditional ways for many, many years. He was one of the leaders who played an important role in getting the Junior Rangers program running in Nunavik, which has become a cherished program nationwide. He has run a summer camp for more 20 years where youth are taught certain roles on the land. This has also influenced adults in recapturing our way of life. He has led survival courses in the north, where many Inuit men have been trained to survive the harsh environment, using mostly traditional ways. Some participants have gone on to become trainers themselves and share their knowledge with other Inuit and those from away. Paulusie also has played a tremendous role in reviving the Inuit dog, long before Ivakkak was introduced. This has resulted in many dog teams being established in Puvirnituq and throughout Nunavik.

Presented by Pita Aatami, Makivik Corporation
The Late Putulik Papigatuk
ITK Advancement of Regional Issues Award
The late Putulik Papigatuk was a signatory of both the JBNQA and NILCA agreements, and was a lifelong political figure, advocating for traditional and cultural issues and activities, both locally and regionally. He was very active initially with the landholdings and presently still with hunting and trapping organizations, including environmental groups. He was nominated by Makivik Board Member Adamie Alaku in honour of his lifelong work and lasting legacy.

Presented by Pita Aatami, Makivik Corporation
Josepi Padlayat
ITK Advancement of Regional Issues Award
Josepi was a pioneer in communications strategy in Nunavik, including the inception of TNI. He was involved in the birth of radio communications with FM stations and regional radio broadcasts, and the improvements to HF radio communications in Nunavik. Josepi has gone on to take on leadership positions at both the Avataq Cultural Institute and the Nunavik Regional Board of Health and Social Services. He was nominated by Makivik Board Member Adamie Alaku for his service to Nunavik and Nunavimmiut.

Presented by Pita Aatami, Makivik Corporation
The Late Noah Qumak
ITK Advancement of Regional Issues Award
Noah Qumak was nominated by Makivik Board Member Adamie Alaku and Salluit Mayor Paulusie Papigatuk for his contribution to the political structure that exists today in Nunavik. He was one of the first Inuit to step forward at the local, regional, and then national level to bring Inuit into modern day politics. As one of the first men from Nunavik to ever meet with representatives from different regions and territories, he was able to unite people so that Inuit spoke with one voice. Noah was instrumental in the creation of Inuit Tapisat Canada (which went on to become Inuit Tapiriit Kanatami, with Noah’s involvement in 1971) and he represented Salluit and the Nunavik region at meetings with Inuit from Labrador and the NWT. He travelled to far-away places such as Quebec City and Coppermine to promote self-government and to unite the people. Along with Committee for Original Peoples’ Entitlement, the creation of ITK led to the inception of 5 more organizations to represent Inuit, including: The Northern Quebec Inuit Association, the Labrador Inuit Association, the Kitikmeot Inuit Organization, the Kivalliq Inuit Association and the Qikiqtani Inuit Association.

Presented by Natan Obed, Inuit Tapiriit Kantami
Avataq Cultural Institute
Inuit Cultural Repatriation Award
Avataq Cultural Institute is being presented with this award for its role in repatriating and preserving Nunavik Inuit culture regionally and nationally. Examples include Avataq’s work to repatriate human remains taken by archeologists in 1967 from Inuit gravesites between present-day Umiujaq and Kuujjuaraapik. Descendants of the lead archeologist returned the remains in 2009. Avataq has also played an important role in salvaging historical artifacts in Nunavik communities, including work in Inukjuak in 2012 to uncover lithic tools and flakes ranging from the Dorset, Paleoeskimo, and Neoeskimo (Inuit) periods. Among many other active projects, Avataq continues to lobby for the classification of the Qajartalik rock carvings near Kangirsujuaq as a protected world heritage site. The rocky island contains 170 carvings of faces that have been cut in the outcrop’s soft soapstone along the 120-metre-long kayak-shaped ridge. 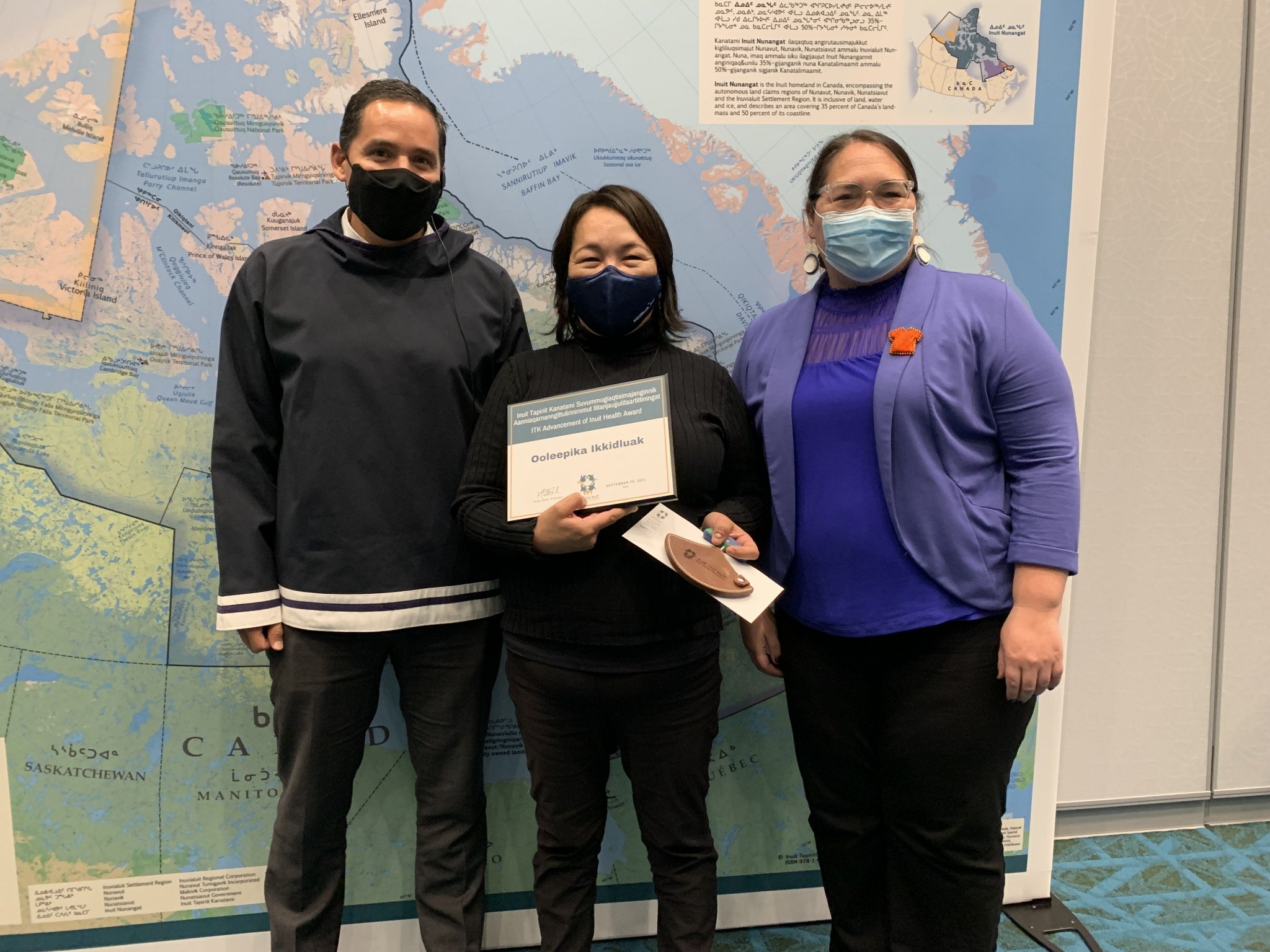